Pelé was walking towards the gates of heaven, a big smile on his face as he took in the beautiful surroundings. He had always known that when his time came, he would be welcomed into heaven with open arms. And now, here he was, ready to spend eternity in the company of the Almighty himself.

As he approached the gates, he saw a figure standing there, his presence emanating an almost palpable sense of power and charisma. It was God, the Almighty himself, and he was smiling at Pelé with a mischievous twinkle in his eye.

“Welcome, Pelé!” God boomed, his voice carrying across the vast expanse of heaven. “It’s an honor to meet you, my boy. I’ve been a fan of yours for years, you know. Your skills on the pitch were nothing short of miraculous.”

Pelé chuckled, feeling a little embarrassed at the praise. “Thank you, God,” he said, bowing his head slightly. “I’m just glad I could bring some joy and happiness to the world through my love of football.”

“And you did that in spades, my boy,” God replied, his eyes sparkling with amusement. “I mean, just look at Cristiano Ronaldo and Leo Messi. They wouldn’t be where they are today if it weren’t for your influence on the game. And let’s not even talk about the amount of money they’ve made thanks to you paving the way. It’s almost obscene, if I’m being honest.”

Pelé laughed. “I’m just glad I could make a positive impact on the world,” he said modestly.

“Well, I’ll be honest with you, Pelé,” God said, his tone turning more serious. “I was a little worried about how things were going to go for you. I mean, winning the World Cup three times without any help from me? That’s no small feat, my boy. But you pulled it off with flying colors. You truly are one of the greatest football players in history.”

Pelé felt his cheeks flush with pride at the compliment. “Thank you, God,” he said, his voice filled with gratitude. “I couldn’t have done it without the support of my team and my fans.”

“Well, I’m sure they all had a hand in your success,” God replied, his tone turning playful again. “But I have a feeling it was mostly due to your talent and hard work. Now, come on in. I have someone I want you to meet.”

With that, God turned and led Pelé through the gates of heaven and down a long, winding path. As they walked, Pelé couldn’t help but feel a sense of awe at the beauty and grandeur of the place. It was like nothing he had ever seen before, and he knew that he was truly blessed to be here.

Finally, they arrived at a large, open area where a group of people were gathered. At the center of the group was a familiar face, someone Pelé had known for many years: Diego Maradona.

“Pelé!” Maradona exclaimed, his eyes lighting up with excitement. “It’s so good to see you, my friend!”

Pelé grinned, happy to see his old friend again. “Diego!” he said, giving Maradona a warm embrace. “It’s been too long. How have you been?”

“Oh, you know,” Maradona replied, a mischievous glint in his eye. “Just enjoying the good death up here in heaven. But enough about me. Tell me, how did you manage to win the World Cup three times without any help from God?”

Pelé chuckled. “Well, I had a lot of talent and a lot of hard work, of course,” he said with a wink. “But I also had a lot of support from my team and my fans. They were always there for me, and that made all the difference.”

Maradona nodded, a little disappointed that he wasn’t going to get a more juicy answer. “Well, I won’t lie, I’m a little jealous,” he said, his tone turning playful again. “But hey, at least I have the Hand of God on my side.” He held up his hand, wiggling his fingers dramatically.

God laughed, his eyes twinkling with amusement. “Oh, Diego, you always were a jester,” he said, shaking his head. “But seriously, it’s great to see both of you here. I’ve been a fan of both of your careers, and it’s an honor to have you both in heaven.”

“Thank you, God,” Pelé and Maradona said in unison, bowing their heads in respect.

“Now, come on,” God said, clapping his hands together. “Let’s go have some fun. I have a feeling the rest of eternity is going to be one big party with the two of you around.”

And with that, the three of them walked off into the sunset, their laughter and banter filling the air as they went. It was going to be a wild ride, but Pelé and Maradona were ready for whatever heaven had in store for them. They were two of the greatest football players in history, after all, and they knew how to have a good time, especially when there was a ball around. 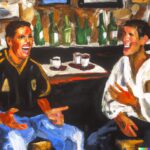 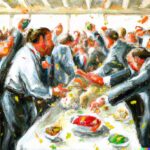 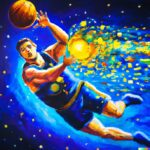 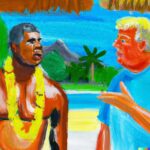